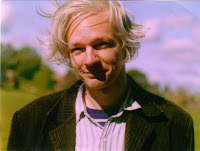 The State is a condition, a certain relationship between human beings, a mode of behavior; we destroy it by contracting other relationships, by behaving differently toward one another....We are the state, and we shall continue to be the state until we have created the institutions that form a real community and society of men.

Bertrand Russell introduced the second volume of his autobiographical work with the following:

I saw a chapel all of gold that none did dare to enter in, and many weeping aloud without, weeping, mourning, worshipping. I saw a serpent rise between the white pillars of the door, and he forced and forced and forced, till down the golden hinges tore; And along the pavement sweet set with pearls and rubies bright, all his shining length he drew, -- till upon the altar white, vomited his poison out on the bread and on the wine. So I ran into a sty, and laid me down among the swine. W. Blake, The Defiled Sanctuary

IQ.ORG also used this quote, till discovering it in Russell. This seems to be one of Blake's least popular poems, but like many of his later less lyrical works has strength in the darkness of the vision. One can see how Blake's insight here resonated with Russell's desired self perception. But what if Russell not only flees from desecration revealed but is the dramatic figure of causation and revelation? Russell is the actor of change. Russell is the serpent and vomiting out his poison into the transubstantiated body of Christ, an interpretation that would have pleased both Russell and his enemies in the British and American theocracies. Now I say unto you -- arise serpents! Tear the hinges from their doors, stand above the alter white and vomit out your poison till deceit crumbles and sets free the dove.